To produce an accurate monthly totals for submitting Real Time Information to HMRC, it could be necessary to enter any funding and/or CIS deductions that are applicable to the company. 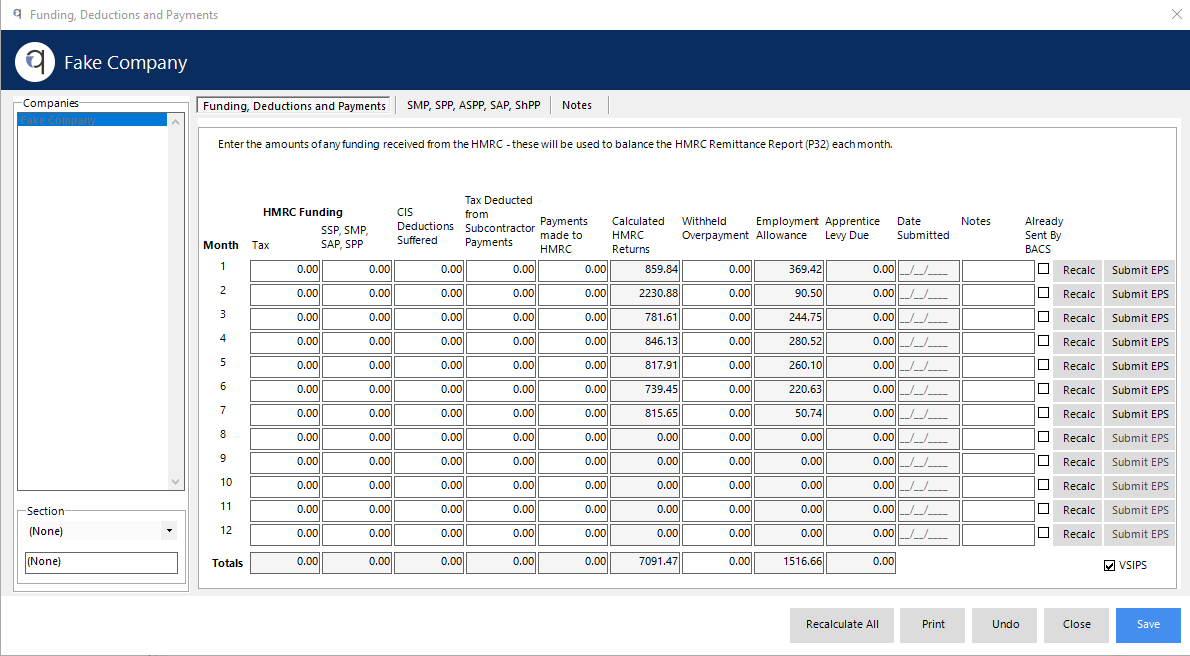 The first two columns under HMRC Funding: ‘Tax’ and ‘ SMP, SAP, SPP’ are for adding figures for any funding received from HMRC. Funding is available to small companies to help pay tax or paying employees SMP, SAP, SPP and  ShPP.

HMRC Funding should only be used when money has been received  from HMRC. For recovery of statutory payments made at the businesses expense see the SMP, SPP, ASPP, SAP, ShPP tab.

If you have subcontractors set up on the payroll tax deducted from them will show in ‘Tax Deducted From Subcontractors’.

Payments Made To HMRC

If you have paid HMRC in a monthly period(s) then you can enter and keep track of what you have paid by entering in the amount into the ‘Payments made to HMRC’ box.

The ‘Calculated HMRC Returns’ box is filled by running the P32 report for the relevant month. To ensure that the figure is accurate run or re-run the p32 report once all staff have been paid and any CIS Deductions Suffered entered.

If you need to hold back an amount in a month because you have overpaid in a previous month then you can enter in the figure into ‘Withheld Overpayment’.

This is where the amount of employment allowance that has been claimed is shown.

Once an EPS has been submitted for the month the Date Submitted box will be populated.

You can leave notes against periods to remind yourself of any points about that month or figures. Notes left here can also be accessed via the ‘Notes’ tab along the top of the EOY Totals screen.

Recalculate all does the same but for months 1-12.

Do you want to overwrite one figure with another figure?

When a P32 report is run or when using the ‘Recalc’/‘Recalculate All’ buttons sometimes a message saying ‘Do you want to overwrite one figure with another’ will be shown.

This message can occur if the figure for the month(s) is different from the current figure in the ‘Calculated HMRC Returns’ box in ‘EOY Totals’.

Click ‘Yes’ to overwrite the old figure with the new figure. Click ‘No’ if you want to look into the figures before overwriting.

If you have run a P32 for multiple periods and you are asked if you ‘want to replace the period totals’, you should say No. The reason for this is that if you run a P32 for periods 1 – 3 for example and you say ‘Yes’ to replacing the period totals, then the totals for 1 – 3 will be summed and entered in period 3. This is useful is if you pay HMRC quarterly. If this has happened, there’s no need to worry, you can hit the ‘Recalculate All’ button in the EOY totals screen to get the figures back into each period. 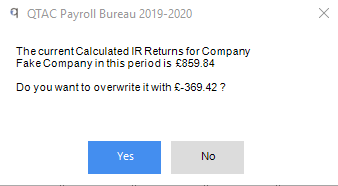 With Real Time Information (RTI), you may need to submit an ‘EPS’ (Employer Payment Summary) each month.

An EPS would need to be submitted if you have any recovery from statutory payments like SMP, SPP, etc or CIS deductions suffered then you should submit an EPS each period to inform HMRC of a reduction in your liabilities.

An EPS would also be submitted if you have not paid any employees in a tax period (Period of Inactivity), so HMRC do not expect any payment from you.

Click on ‘Submit EPS’ or you can also submit the EPS by printing your P32 Report if you have set your ‘User Options’ to submit the EPS automatically when printing the P32 Report, or by going into ‘File by Internet’ > ‘Submit to HMRC’ and selecting the EPS option.